When we purchased our first home in 1981 amateur radio antenna siting was a top selection criteria. New housing developments were out of the question! Our old home on Dudley Street grew dipoles and towers and beams, and seemed to be nearly perfect. But when Gayle got tired of climbing steps to get into the house and climbing more steps to get to the bedroom and bathroom, she announced that it was "her turn" to choose our new QTH, and amateur radio was secondary on her priority list! We chose to build a beautiful new home in a development with excellent amenities for living into our retirement years, but it came with restrictive covenants that prohibit any outside antenna other than a "small antenna for television or wireless internet reception." I feared my VHF & HF operating days might be over.

We chose to build our new home after several unsuccessful attempts to find and purchase a house with just the right qualities. We selected our lot in the Northern Lights development of Lincoln because of it's proximity to work for both Gayle and I. The criteria that we used when selecting the lot was-

1.  It had to be on a hilltop for good VHF and HF reception.

2.  It had to be a corner lot to minimize TVI to neighbors

The original hilltop that we selected was East of 84th Street and South of Holdrege in Lincoln, and commanded an excellent view of the Salt Creek and Stevens Creek valleys. In fact, you could almost see Omaha! However, the land developer wanted the lot price ($45K) up front, and had very little experience in building homes! They initially said that there wasn't any covenants or restrictions on the lots, but soon retracted this.

Our second choice was North of Holdrege near 79th Street, on either Dawsons Creek, Medicine Hat or Yellow Knife Drive. Our first choice was on the crest of the hill on the corner of 79th and Yellow Knife Drive. A corner lot is slightly more expensive due to the sidewalks and such, but a "flagpole" antenna could be placed toward the corner and be far enough away from all our neighbors, so that TVI would be minimized. This was desirable in order to keep it "stealth".

Our house design was to be such that all the things that we (Gayle) needed would be on the first floor. The laundry room and master bedroom must be on the first level, and only one or two steps would get us from the yard or garage into the house. A ramp was built from the garage to the back hallway on Gayle's request. In order to get dipole and VHF antennas up higher above the ground, we decided to go with a story & one-half type of construction. The second floor would only have the kid's bedrooms and their bathroom, and when they move out, these would be guest rooms. The basement would be for storage and my hamshack! There were also two main attic areas. One was over the garage, and the other was over the kid's bedrooms.  I made sure that the attic over the garage had a floor to walk on while assembling antennas in it.  It also had to have a way to route cables down to my basement hamshack area. I thought about adding a cupulo on top of the roof large enough to swing a mini-beam inside, but decided that it wasn't worth the extra money, and would look very strange indeed. 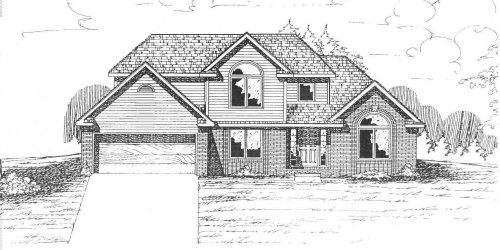 The front driveway faces South, on Yellow Knife Drive, and 79th Street is on the left (West).

At this time, my plans are to place insulated wires for a multiple-band single-feed half-wave dipole on the roof. The 40 meter elements would run East-West along the main ridge of the roof, and probably 10 and 17 meter elements would run North-South onto the garage ridge and the rear slope. Altough I would like to have elements for 75 meters, these will likely be too long for the house dimensions unless loaded. The coax feed for this antenna would be routed from the basement to the attic area within my designed-in mechanical chase, then out onto the roof through a vent.  The wire insulation color would be chosen to blend-in with the shingles.

VHF and UHF verticals are planned for within fake vent pipes, similar to the Ventenna design.

My 144 and 432 MHz Yagis will be placed in the attic areas at first.  The attic over the garage will house beams facing South, away from the house.  I thought about placing them facing both North and South, but the North-facing beams would go right through the kid's bedroom/bathroom areas, and would expose them (and their electronics) to possibly dangerous RF fields. The attic over the kid's bedrooms would have beams pointing East, again away from the living areas of the second floor.

My long-range plans are to add a flagpole vertical for 15 & 20 meters on a lanscaped berm just SW of the house, on the corner of 79th and Yellow Knife. This could even be lighted, and would provide a route for both the power cable and coax back to the house. Another long-range plan is to design a combination TV/50/144/432 rotatable beam that could be placed on a roof tripod or tower, and would "qualify" as a legitimate TV antenna. FCC rules currently allow anyone to place a TV reception antenna on the outside of their home, even in covenant areas!  This rule is called OTARD, for Over-The-Air-Reception-Device. OTARD only applies to TV and wireless internet antennas as written.

This is what my home would look like with the wire dipoles on the roof, beams in the attics, vent pipe verticals and the flagpole vertical:

The Dreaded CC&R's - Here is Some Advice

A Groundlevel Hidden HF Antenna -- From K3MT -- The GRASSWIRE -- You read it correctly!!

End-Fedz -- full length half wave dipoles, but with an important difference. The coax connector is at one end of the dipole, where it is most needed. From Universal Radio (6m - 20m single band antennas from approx. $40)

American Flag Store - REAL flagpoles, both aluminum & fiberglass ($400 and up)

Postscrip:  In October 2009, Gayle and I moved from Lincoln, NE to Grand Haven and then to Spring Lake, MI where I have a new job. Our house in Lincoln was sold.  As of May 2010, I am in the process of building a tower and putting up antennas in an area free of antenna restrictions.